Happy Holidays! Ania has decided to share not one, but two projects for December’s Rug of the Month. These projects are connected to each other, as you can gleam from the images and Q&A below.

Check out the rest of this post to find pictures of Ania’s Klimt pillows (inspired by Gustav Klimt), and a Q&A on how she created them. They showcase a really interesting use of mixed media, with a whole variety of novelty yarns worked into them, in addition to a combination of #6 and #5 strips of wool.

Gustav Klimt was an Austrian painter active at the beginning of the twentieth century. He was most famed for his “golden phase” paintings, which include such masterpieces as the Kiss and Portrait of Adele Bloch-Bauer I. He was inspired by the idea of creating a “total work of art,” where total ornamentation and decoration are embraced.

What inspired you to start this project?

When I designed these two patterns, it was with Klimt in mind.

Klimt Pillow #1: this pillow made great use of mixed media and novelty yarns

Klimt Pillow #2: Ania had fun exploring shapes and colors in this pillow

How did you approach color planning?

The colors were part of the flow – I would pick up the wool and decide on the spot that I would use this color in this shape and see where it took me. The background however, was going to have to be yellow, like Klimt.

Was there a reason why you decided to create two pillows in this manner, where they aren’t identical patterns but instead stemmed from the same source?

I took inspiration from Klimt to make these pillows – I took what was not the major theme of his paintings, the background, and made it the focal point.

I just decided that I wanted to design two separate Klimt projects – it was a whim and I let it take me where it would. It was exploring and playing, not knowing where I would end up, until it was done. 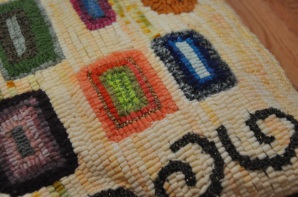 What are you most proud of in this rug?

That there are people who have really wanted to purchase these pillows for their own homes and businesses. It was exciting to see that these rugs brought so much happiness to others that they wanted them for their own lives.

It’s very fitting to end 2016’s blog posts with this rug – hopefully they will bring happiness to our readers for the New Year!

Hope you’ve enjoyed reading about Ania’s Klimt pillows! Feel free to comment below with your thoughts 🙂